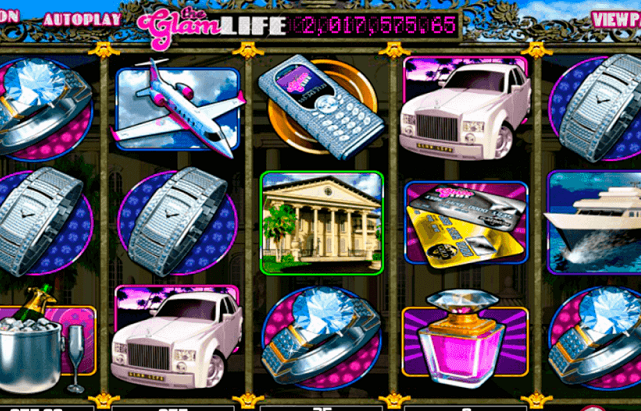 There’s no storyline to the BetSoft slot title The Glam Life; it doesn’t need one. The 30-payline game sums up its appeal to the online and mobile players of the reality-TV age in its bold design and play. The Glam Life’s high-value prizes and the progressive jackpot could well be life changing, so the design team has built the trappings of jet-set living into its symbols. Glitter and neon effects on the controls and the winning animations, along with a punchy disco-inspired electro soundtrack, keep the excitement levels up.

The Glam Life offers prizes of up to 5,000 credits on a single payline, and it includes four bonus features that can boost wins substantially. In an ironic nod to the instant wealth that players might win, the five transparent reels are framed in the railings of a stone-pillared wall. The player looks through them, barred from the tinkling fountain and mansion beyond the fence… or not, if they strike it lucky…

The Glam Life has no Wild symbol, but by using only seven ordinary symbols to trigger the bulk of its wins, it gives players slightly better odds than a title with ten or more icons across five reels. Lowest-value wins go to the credit cards and the champagne on ice, each worth 5 credits for three of a kind. Prizes for five matches start at 200 credits for the credit cards, rising to 300 for the champagne.

Prizes for five of a kind among the remainder of the standard symbols: a smartphone, a platinum watch, a diamond ring, a Rolls Royce and a yacht; are 400, 500, 1,000, 2,000 and 5,000 credits, respectively. Players can adjust both coins size and the number of coins played per line when choosing betting options. It pays to engage the max bet of 5 coins per line, even if the player has to lower the coin size, because five yachts on one payline is also the progressive jackpot trigger: but only if the player is betting the maximum 5 coins per line.

The Glam Life’s first bonus icon is a private jet; three or more anywhere on the same active payline wins the player instant free spins. For three, four or five jets on the same line, the bonus is 2, 3 or 5 free spins.

The Glam Life’s mansion icon triggers the Second Screen bonus. Three or more arriving on the same active payline triggers the game within the game. The player is whisked off to a world map with several landmark destinations. The player chooses three landmarks to visit, and the prizes hidden at those locations are revealed during the trip.

Pick Me and Match Bonuses

The two final bonus symbols in The Glam Life are an upmarket perfume bottle and a discreet necklace case. Three or more necklaces cases on any active payline trigger the Pick Me bonus. The player must click one of the cases on the reels that activated the bonus, and it will reveal an instant prize.

The Match bonus is activated by three or more perfume bottles on any The Glam Life payline. The reels are covered by velvet drapes, and the player presented with 15 ring boxes. The player picks boxes, revealing one of three different types of diamond inside, along with a matching prize. The player chooses boxes until they have revealed three matching gems.